It’s exactly the sort of jaunty, casual job title one might expect from the 37-year-old, who has spent the better part of a decade cultivating his image as a hipster Robin Hood while masterminding an ethical “one-for-one” business model now widely emulated in the retail world.

Mycoskie still sports the same piles of beaded bracelets and long curly hair that became his trademark in the early days of TOMS in 2006.

His Instagram feed looks like that of a yuppie backpacker, featuring exotic vacation sunsets and a video showing his followers how to brew organic Costa Rican coffee using a sock as a filter.

Alongside this insouciant image, Mycoskie has built a casual shoe empire now valued at $625 million, per a Reuters report. (A TOMS spokesman independently confirmed this figure to Forbes.)

On Wednesday, Reuters revealed that Bain Capital has acquired a 50 per cent stake in TOMS, beating out other private equity outfits.

Founder Mycoskie will remain at the helm. He’ll also retain 50 per cent of the company he started following an eye-opening trip to Argentina in his late twenties.

That means the one-time Amazing Race contestant has a stake in TOMS worth over $300 million. (Exact financial terms of the deal weren’t disclosed, but Mycoskie will likely have received cash from Bain, pushing his actual net worth well above that figure.)

Not bad for a guy who only started selling his $48 canvas espadrilles eight years ago.

Watch for Mycoskie’s net worth to increase as TOMS expands into new categories.

As well as footwear of all kinds (sandals and boots, for instance), the brand now sells optical frames and sunglasses. As with the company’s shoes, each pair of glasses sold means one goes to a needy person unable to afford them.

TOMS also sells ethical, fair-trade organic coffee. With each bag purchased, a week worth of clean water goes to a person in need.

BioTRUST
was acquired by 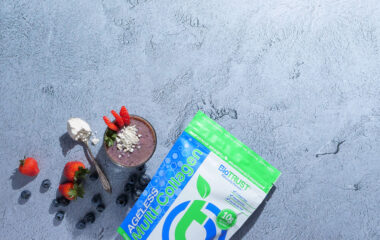